With the next version of Office around the corner, the number one question on the minds of email designers and coders is:

Ever since Outlook 2007 the Word rendering engine has been used to render emails in Outlook. The Word engine has limited support for CSS based layouts and ever since then email coders have had to design around its numerous quirks.

In fact Outlook is the ONLY reason all emails are still designed with tables.

Lets explore why Web Standards support in Outlook is a good idea as well as one possible way to get there.

As more and more developers and designers cut their teeth on modern HTML5 and CSS3 designs, the art of table-making will become obscure. Unless Outlook supports modern email, Outlook users will see ever increasing instances of broken emails which negatively impact their experience.

Outlook.com, the Windows Phone email client, and even surprisingly Outlook 2011 for the Mac and the recently released Outlook for Mac already support HTML5 and CSS3. What better way to showcase a consistent experience between your products than to add the same support to Outlook on the PC!

One of the key advantages of the Office 365 developer program is that developers can leverage their existing HTML5 and CSS3 investments.

However, when developers create apps that compose and send emails, imagine the support complaints you’d be getting from developers asking why their HTML5 and CSS3 investments don’t work inside email.

At one time the Internet Explorer browser (IE6) had a reputation as a browser that didn’t support web standards. IE8 finally addressed that with much better support for web standards.

In the same vein, having developers complain about Outlook in social media can’t be good.

@Outlook https://t.co/dSw0Sz5R1o shows how poor HTML/CSS support is for Outlook clients, would love to see commitment to improve #emailgeeks

A frustrating day battling Outlook with HTML email layouts. It's like going back in time before web standards. #emaildesign #toeachhisown

Getting To Modern Email Support In Outlook 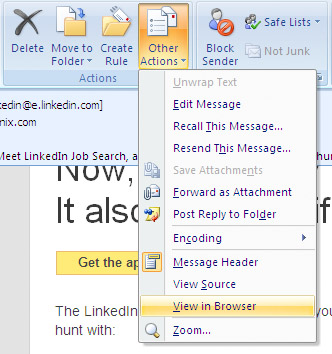 Outlook 2007 and newer comes with a “View in Browser” option. When a user selects this option from the menu, the email is loaded into a new instance of Internet Explorer with the latest web standards support! The downside is that a user action is required.

Perhaps instead of having the user click to open the email in a browser window, the next version of Outlook could automatically load Internet Explorer within the Outlook message pane itself!

But what about Word compatibility in Outlook?

Internet Explorer 8 introduced the X-UA-Compatible Meta Tag that allowed the web page to specify which versions of the browser to emulate when rendering the content. A setting of “IE=edge” tells the browser to render the content using the latest web standards.

Oh wait. Did I mention that its already been done? A commenter zerocents on the Campaign Monitor forum discovered that the Windows Phone email client actually uses this tag to determine if it should render an email with full HTML5 and CSS3 support.

And just like task pane app support was added to Outlook 2013 via a patch in Office 2013 SP1, web standards support can be added to previous versions of Outlook via a Service Pack as well.

Lets hope 2015 will not be remembered as the eighth anniversary of when Outlook broke email, but the year that Microsoft introduced the best Outlook ever with support for modern open web standards!