Gmail is increasing font sizes on emails in their iOS app – again. Gmail first rolled out this change a month ago but rolled it back 3 days later. However, sad to say it looks like we’re going to have to deal with this once more. (Thanks Niven)

For more background, see: Gmail iOS App Increases Email Font Size and What You Can Do About It

I noticed this time that fewer emails appear to have their fonts resized and when it happens it often results in better readability. However, I still came across many emails that look broken from this change.

Here’s an example of a recent email from Logitech that is broken due to the font increase: 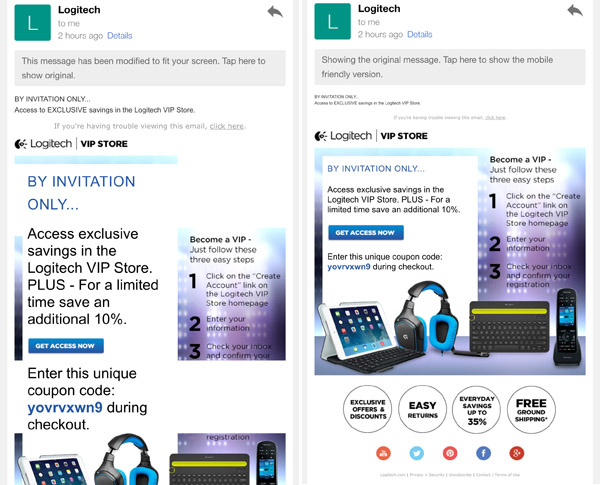 iOS as Testbed for Android?

Interestingly this feature still hasn’t made it to Gmail on Android. I’m thinking Google might be treating iOS users as beta testers since the number of people using Gmail on iOS is much smaller than Android as Gmail comes bundled on Android.

If your design looks broken, you might want to alter it to accommodate Gmail’s changes. However, if you’re short on time this fix appears to prevent Gmail from resizing your fonts.

Want to get alerted to “breaking” news like this? Sign up to the FreshInbox newsletter!
Latest Comments