Learn more about Gmail’s Promotion Card or
send yourself an example. 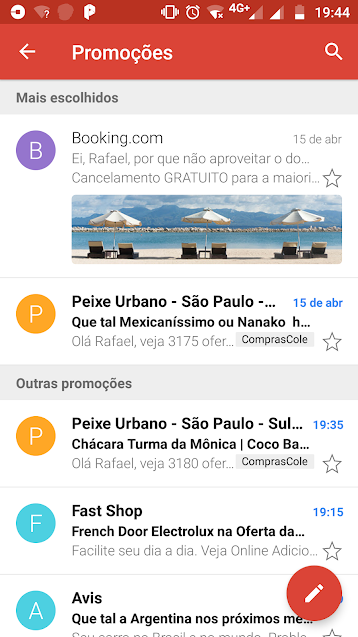 It looks like Gmail is taking another shot at cover images for email.

Earlier today, Return Path’s Senior Email Strategist, Rafael Viana (who lives in Brazil) discovered that an email in his Gmail Android inbox contained an image under the subject line of an email from Booking.com. Upon further inspection, it appears that this image is defined in a special Gmail specific code snippet called Schema.org. Read here for Return Path’s take on this.

Here’s the code that generates the image in Gmail Android. This code appears in the head of the email.

The code block lists three Schema types: Organization, DiscountOffer and PromotionCard. The PromotionCard schema is the one that specifies the image that is displayed under the subject.

A search in Gmail’s Schema website does not list the PromotionCard (or the DiscountOffer) Schema type, which leads me to think that this is “experimental” – hence the limited rollout in Brazil(?).

Google is more serious about Promotion Card than Grid View

The thing about Grid View is that only Gmail users who signed up for the Grid View feature ever got to see it. In the email marketing circles, we’ve joked that most of the people who had Grid View turned on were email marketers!

This time around, this feature was being shown to regular users (albeit a subset of them). When Gmail retired Grid View, a Gmail Product Manager told me that they were shelving Grid View “for now”. I’m guessing they’ve taken in the lessons learnt from Grid View and are now serious about releasing this feature for the masses.

Its a game changer for email marketing

This has been discussed widely after Google’s previous Grid View announcement but having the ability to display imagery in the subject without opening the email is very powerful. As they say a picture is worth a thousand words and sometimes words just can’t describe things like the design of a brand new apparel or consumer device!

The big question though is whether senders need to be whitelisted. In the case of the existing Schema features, all senders need to register with Google. However for the limited release of Grid View, registration was not required for senders – featured images for a sender automatically became enabled once Google detected a sufficient amount of email traffic from that sender.

I have a feeling registration with Google will probably be required in the initial rollout just so that Google can monitor how the format is being used.

In addition to registering, the features available in Schema such as Inbox Actions specifically tend to be reserved for transactional email messages.

“Actions should be used for transactional mail where a high interaction rate is expected. They should not be used on promotional bulk mail.”

However, transactional emails were not part of the requirements for senders of Grid View featured images. This link goes over the various Grid View requirements.

That said, seeing that Google hasn’t been pushing Google+ as much these days, its likely that the ticket to entry for Promotion Card is sending a relatively high volume of properly authenticated emails with a low spam complaint rate.

Higher Chance of Success Than AMP

If you haven’t heard, Gmail made a splash two months ago with an interactive email format called AMP for Gmail.

Unlike AMP for Gmail which requires ridiculous tooling changes for existing email service providers, many senders are already sending Schema enhanced email. Furthermore, many email service providers such as MailChimp added the ability to send Grid View images in their apps (only to disable it later) which they can easily enable should Gmail make Promotion Card widely available.

Count me in as cautiously optimistic on this one.

Side note: Rafael could see no indications that the Gmail app was using the DiscountOffer Schema.